Did you know? Working Tax Credit bill would reduce if under-employed people took on the hours that the over-worked don’t want.

It is a bit of a bold statement but, according to my reading of the November ONS data, there is a nearly perfect match between:
•the number of people who feel over-worked (wanting less hours for less pay) and those who want to work longer;
•the hours each group wants to lose or gain;
•The total UK working hours lost or gained per week.
It sounds like a win-win answer: everybody works the hours they want and the overall UK weekly hours worked don’t really change. Those gaining the additional hours will tend to be in the low paid jobs that are currently subsidised by Working Tax Credits – so more pay could reduce this bill.

But, as ever, the devil is in the detail: most under-employed people are young and in part-time and elementary occupations such as personal services, cleaning, security, and the leisure industry. Those wanting to lose hours are older and in full-time professional jobs such as managers, senior officers/officials in the military and police plus the health sector. Women fare worse being both more under and over-employed than men.

People wanting to cut their hours tend to be higher skilled, Higher paid and probably have more experience as they are older. So “job carving” might be the answer: the senior manager might off-load those parts of her job that juniors could achieve, for less pay and develop their skills at the same time.

“Wanting” to change your working hours may be more of a necessity than a choice. For the under-employed, the financial impetus will be a driver along with career ambitions whereas the over-employed may see their long-term health as more important than their income (23% will be acquiring disabilities). Reducing under and over employment is a goal that can benefit us all.

There is a one page summary of the key ONS data. (141125 ONS data under and over employment) 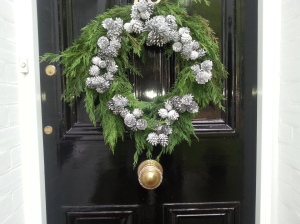 Bouquet of the week.
Dedicated to Karen J who has been under the weather and Karen W after an excellent dinner at Lauros.
It’s that time of the year to dig out the Christmas wreaths again and I’ve gone fir-cone crazy this year: sprayed silver for the front door and au naturel on the side gates. And wired monkey nuts are still cropping up elsewhere (indoors to avoid tempting birds and four-legged predators). First batch of home-made mince pies with home-made mincemeat came out of the oven today – have managed to resist testing them so far.

Helping disabled people to work since 2000