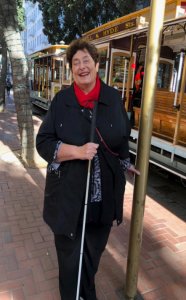 People have often asked me about how I can manage with no sight at all.  Here are some of my most important aids:

Laptop/PC.  I use JAWS software – about £800 (and blind people don’t pay VAT for this or any other of the following).  To make this work best, one has to be a touch-typist which is very easy to become (I learned with an hour a day over a summer holiday).  However, some training to use JAWS is probably worthwhile.  Instead of using a mouse and on-screen-cursor, one uses key strokes plus the letters/numbers on the keyboard.  As one types, the IT speaks each letter/number and, when the space bar is pressed, speaks the whole word.  I can probably type faster than most sighted people, use it all the time for e-mails, writing and reading documents, running my calendar and more. 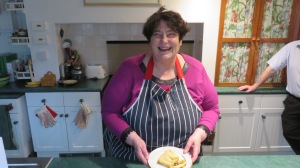 There are also some simpler screen readers available for free on-line and via PC operating systems.  Look in Control Panel and Accessibility if you are using Microsoft – there are ways of permanently enlarging text, increasing screen contrast (for those with some residual sight), plus some basic screen reading facilities.

Mobile phone.  I investigated a smart phone with pre-installed software specifically for blind people but found that it didn’t offer more than is free elsewhere as downloadable apps while many useful functions of the phone were no longer available.  But then I may be something of a Luddite.  Instead I prefer my I-phone and use the Voice Over facility (Settings, General, Accessibility) which enables me to find out what is on screen.  There are slightly different finger strokes etc when using this but these aren’t difficult to learn.  I particularly use voice with the phone: dictating replies to e-mails but the voice recognition isn’t great and I have difficulty correcting.  Hence, my replies often read rather oddly!  But it is good for quick response to friends rather than carefully phrased replies on significant matters.  The phone also has Ciri whom I can ask by voice for the time, setting alarms and more.

MP3 Player.  I have Milestones made in Switzerland.  These are small enough to clip to a bra strap so I always carry one with me.  On the Milestone you can listen to audio books, music, radio, dictate notes, set alarms, tell the time and more.  Books and music are read on the Milestone once they have been copied on to an SD card via the PC.  These are no longer available from RNIB but can be bought (perhaps £300). With a bit of on-line research.

Talking books.  I have a vast collection of unabridged talking books on cassette – mainly murder stories, crime thrillers etc – and would be very happy to pass them on.  Otherwise, there are two main libraries for talking books: RNIB and Calibre.  I still get unabridged books on CD because this has become most manageable for me but one can also obtain as downloads and in other formats.  However, neither library is very easy to access so, with RNIB, I have an Author List so that I get any books by those writers as they are released.

Talking scales and thermometers.  These are essential kitchen equipment for me and are available via RNIB.  However, the speaking voice on the scales has very poor diction so isn’t the easiest to understand if the kitchen is busy and noisy.  I wouldn’t bother with speaking jugs as too bulky and not needed if one remembers that 10 millilitres of water weighs 10 milligrams.

Breville hotpot.  Pouring boiling water from a kettle in to a cup can be pretty harzardous.  There are some liquid measures that slip over the lip of a cup and beep when the water reaches a set level (and again when you add the milk) but these are a pain.  Instead I use a “mainstream” type of kettle made, I think, by Breville.  It has a tank that is filled with cold water (not difficult).  One presses a button which results in a pre-measured amount of water being heated to boiling and then automatically dispensed in to the waiting cup/mug.  I have an old version which was excellent as one could adjust the amount of water dispensed but I’m not sure if the more recent versions have this function.  Either way, it is just a matter of making sure you have the right size mugs!  It is good being able to put the mug with instant coffee or a tea bag under the spout, press the button and walk away while it does the job.

Labelling.  I have an ID-Mate in the kitchen and another in the bedroom for clothes.  The old version is much better than the new one which is so much slower and more complicated.  They come with bar codes that can be ironed on to clothes, stuck on to food containers and more.  One presents the label to the machine, press a button to dictate what the item is, and then it will be read back each time the item is presented.  The huge benefit of the ID Mate is that it can read commercial bar codes.  This means that if it reads a bag of flour’s bar code once and you keep buying the same brand, it will read back to you the same voice label as you input for the original bag.  There are also voice labeling pens that come with their own barcode labels.  But some of these won’t go through a dishwasher or the freezer and microwave.  My favourite is the VoiLa Pen which seems to be no longer available in the UK (but in the USA).  It has the labels held within a plastic frame which makes them easy to find in the freezer and to strike with the reading pen.  One swipes the label with the pen and then dictates the item name; swipe again, and you will hear your voice reading the label.  I found some good superglue that works in extreme temperatures to stick the labels on to the lids of foodboxes.

Food boxes.  Speaking of which, I swear by the Lakeland boxes: they come in three different sizes that all stack but with the same size lid.  So no more hunting through cupboards to find the right lid.  With a voice pen, I use these all the time in freezer, microwave and dishwasher.  Keeping things neat, clean and organised is so important when one can’t see.

Microwave.  There are talking microwaves but I still prefer the rather old-fashioned versions which have dials rather than buttons and digital displays.  I’ve forgotten what each position on the timer dial means but have simply learned from constant use.  But these too are becoming harder to find.

Other kitchen appliances.  I use gas on my hob and oven as I can hear it burning, but I did get an oven with very tactile controls so that I regularly check them plus a glass pull-down top for the hob which automatically switches off the gas to the hob.  It works really well.  Both my dishwasher and washing machine have one-button-operation.  They have both been pre-set so all I have to do is throw in the washing tablet and press a button.  The Bosch fridge is great in having pull-out shelves (like drawers) but a pain in having temperature buttons that are too easy to touch and, unknowingly, change the temperature.

I’ve mentioned makes that I’ve tested – there are possibly others available that do similar jobs.  Prices will change with time – I’m writing this in February 2019.