We’d had a magical morning with aboriginal bushtucker expert, Fred.  He’d introduced me to his wilderness “supermarket” where nature can provide nearly everything for survival.

There was lamandra: a type of grass that has rhubarb-like thick succulent bases to the stems that you can eat.  The seeds can be dried and ground for flour to mix with a little water and bake on a stone for basic flatbread.  And the long grass-like stems themselves are fibrous and strong – perfect for weaving in to baskets or plaiting for a little bush bracelet.

The banksia tree has enormous flowers and equally big seed heads that are packed full of natural oils.  Fred explained that one of these seed heads, pre-heated in a fire, could be carried in your lamandra basket to another camp to start the next fire.  Useful in times without matches and when there are no handy boy scouts to rub together.

He had some invaluable tips for testing which bushtucker is safe to eat: usually, anything red is worth avoiding.  But, if the birds are eating red berries, they are probably safe.  You can double check by rubbing a little of the berry juice on the soft skin inside your wrist.  If it doesn’t react, you can try the next test: rubbing a little on the inside of your lip.  Again, if your mouth doesn’t swell or go numb, its probably safe.  On the other hand, you might prefer to be safe rather than sorry and rely on an expert like Fred. 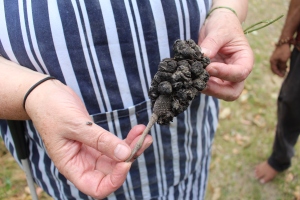 And minutes later, the risks of nature really came home to me.  When we had finished filming, Toby and a friend went off for a swim.  As I arrived to join them, there was the squealing wheels of police cars and officers asking who had called for help.  I could only guess!

Toby and our friend were about 300 metres out in the sea where they had been swept by a rip current.  There was no way that they could get back to the beach and they were getting cold and tired trying to stay afloat in the choppy water.

Four police cars, two paramedic units, two rescue surfers and two helicopters arrived within minutes – plus the local television reporter.  The first surfer to arrive went straight out with his   board to give them help, closely followed by the second with a special rescue board equipped with handgrips and  straps. 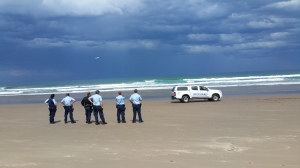 One by one, they were brought ashore on the boards with the helicopters’ downdraft blowing them along.  It really had been touch and go – a few minutes more and they would have drowned.  The paramedics stepped in to check vital signs, wrap them in towels and foil survival “space blankets”.  On their shaky thin white legs, they looked like a couple of oven-ready chickens!

All my hard work to promote the Baking Blind adventure went for nothing – they made the national news that night while I languished on the side-lines!  But the relief was enormous.  I’d felt completely useless standing alone on the beach walkway.  A blind person staggering around on the sand would have just distracted the rescue team so I could do nothing but worry and wait.  My lasting thanks to a man from Cumbria who came to talk to me: he could explain what was going on and reassure me that he could still see two heads out in the sea.       It was a desperate feeling to be completely unable to help in anyway