Each year, there are six garden parties in London: three by the Queen, two for the Duke of Edinburgh Awards and, finally,  for the Not Forgotten association.  Thanks to David  from Blind Veterans UK, I was nominated for the last.  Top -to-toe in summer finery with the emphasis on comfortable shoes, I had the snobbish delight of telling the taxi driver “Buckingham Palace please” .  This was the garden party for ex-military people drawn from across the country a

nd many with different health conditions and disabilities.

Tea was a memory of traditional English afternoon fare: delicate finger sandwiches and tiny cakes.  They had advised that a good lunch beforehand would be sensible!  We strolled around the garden  which ranges from abundant herbaceous borders to peaceful woodland that even the band couldn’t penetrate.

As the shadows lengthened, we sat around the grassed parade ground with pots of strawberries and cream to hear the skirl of the bagpipe band.  I gather that there was a backdrop of Yeomen on loan from the Tower of London.  Her Royal Highness the Duchess of Gloucester sped to the VIP enclosure in her Royal buggy (so much easier on the heels than walking) and the finale Beating Retreat could begin. 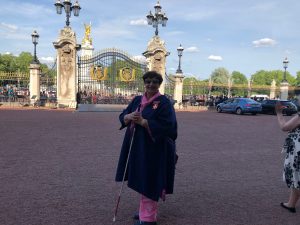 It was a leisurely exit as we unpinned medals and crunched across the gravel to the great gilded gates of the Palace.  Back to the hurly burly of London in rush hour after those tranquil hours commemorating so many who have served their country.