Actually, they weren’t until spread out in the sun for a day.  These aren’t any old cherries but the sour Morello variety from the historic Porter’s Lodge garden www.portersgarden.org  in Portsmouth Naval Base.

My great friend, Joan, is a volunteer gardener in this special garden where much of the planting is authentic to its origins in 1754.  None of those modern upstart hybrids permitted.  Each year the volunteers pick these wonderful cherries and I’m often lucky enough to be spared some for jam.  This year I’m trying different ways of preserving them: bottled; dried in the dehydrator for use in cakes and homemade granola.  If I get more, perhaps homemade glace cherries might be possible 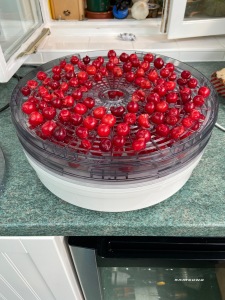 I have a very nifty German-made cherry stoner: the fruit gently rolls from the hopper on to a small piece of rubber.  Pushing down the plunger presses out the stone, through the hole in the rubber and into the collecting box.  Meanwhile, the rubber has sprung back and ejected the cherry – very simple and effective if you have a large amount of fruit to handle.  But still worth checking for any missed stones – no-one wants to lose a tooth. 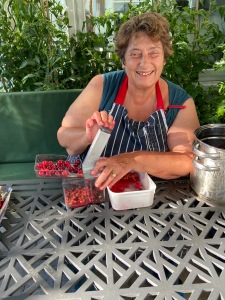 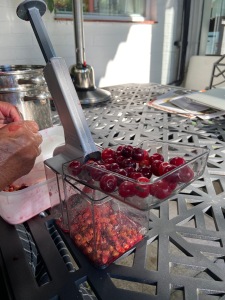 Once stoned, the cherries are washed in very hot/boiling water and then packed in Kilner-style jars (with a rubber seal and metal clip).  I add a dash of kirsch to each jar and then top up with a sugar syrup.  I made the syrup by adding enough water to the juice I’d saved to make 360g and then added 120g of white sugar.  The syrup is heated in a pan until the sugar dissolves and poured into the jars to cover the fruit.  With the seals in place (best done before filling the jars) and lids securely clipped closed, the jars are placed in pans and covered with hot water.  Once the water is boiling in the pans, reduce to a gentle simmer for about 30 minutes.  Air trapped in the bottles will expand and be forced out past the rubber seals.  Allow the jars to cool and then test for a safe seal: undo the clip and try to lift off thelid. If it stays put, they are safe to store – if not, eat them soon.

The Porter’s Garden in the Naval Base is a special location for me: I walked past it every day when I was working in the Old Naval Academy and had to travel by train as  my sight had got too poor for driving.  Little did I know that, over 20 years later, I’d be cooking the produce from that garden.  I have many happy memories of that Naval Base – visitors see it as a historic site; for me, it was my familiar workplace that felt like home.