Nightmare as making preparations for the first outdoor entertaining: day before, tested the electric awning over the terrace.  Went out beautifully; retracted perfectly. Then, entirely of its own volition, extended again and promptly stopped, refusing to respond to frantic presses on the remote control.

All would have been well other than for the gale force winds and rain that then ensued.  Result: one dramatically flagging large awning, dipping down to about a foot off the ground, filling with water and banging on the house.  Too risky for the sous-chef to resolve without another pair of eyes to monitor troubleshooting in such a hazardous situation.  Fortunately, located a couple of experts who cut out the canvas and tied up the frame – electrics and motor burned out.

But I did manage to feed the visitors despite the chaos and finished with an experimental chocolate cake.  I’m convinced that most people rely on their eyes to taste the chocolate so, if its brown with cocoa powder, it’s OK – but not so for us who can’t see it.

Here’s a better version based on the famous Viennese Sachertorte:

Cream the butter and sugar until light and fluffy.

Whisk in the chocolate and vanilla. Followed by the egg yolks (one at a time) on full speed.

Fold in the flour, ground almonds and cocoa powder.

Fold in one third of the egg whites and then the remainder, gently.

Pour in to 23cm tin (buttered and base lined with parchment paper) in one go and level gently.

To finish the cooled cake (optional), brush with warmed apricot jam and cover with a chocolate icing made of 200ml double cream heated and poured over at least 115g plain chocolate -cool before covering cake.

(I made two smaller cakes and cooked for about 20 minutes by when the internal temperature had reached over 95C.  The finished cake keeps well and retains its moistness for at least a week – there was only this scrap left by then). 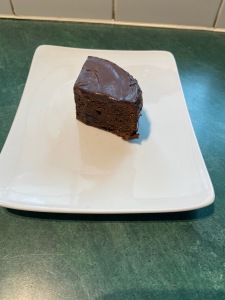