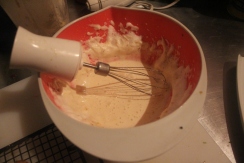 Creating completely new dishes in Noam’s tiny original jungle kitchen was a challenge from the start: strange ingredients, unfamiliar equipment, the pressure of a seven course dinner menu for paying guests.  It was all made even trickier by the heat and deluges of rain plus the complete lack of water inside!  You can see the video (https://www.youtube.com/watch?v=CirMoelCNVg) of my struggles.

I took the easy course with citrus tartlets using lemon mandarinos in place of the classic lemons.  Driver/trainee doctor Victor squeezed all the juice while I got on with the pastry which, of course, was baked blind using balls of kitchen foil to keep the tartlets in shape.

That first night there was a party of nine Americans celebrating a birthday at Noam’s HiR restaurant. The jungle was filled by their music and laughter while the tin roof above their heads rang with the torrents of rain.

Noam and I juggled our way through each course’s complicated elements without any obvious mishaps or delays.  The result was a very happy group of diners, clean plates and tantalised palates – few had encountered anything similar before!

But my attempt at meringues to top the tartlets was a complete disaster: every time I added the sugar, the whisked egg whites collapsed – it was probably the pervading dampness.  I did manage to produce sweet egg white pancakes which, when topped with the lemon mandarino sorbet plus the mangostan sauce and segments, just about passed muster.  The trick was to sound confident and convincing that this had been the plan all along!

Pure chance and readiness to take a risk took me to Tamarindo on the Pacific coast of Costa Rica.  When I’d been planning my Baking Blind tour, I’d simply asked everyone I knew for international contacts and, when one took the trouble to phone me, I just jumped at the chance to cook with him in South America.  You too can meet this truly original chef in his jungle restaurant in the latest video (https://www.youtube.com/watch?v=PH-m1Jh0BhQ).

Driving across the country from the capital, San Jose, was not great during the rainy season.  Deluges of rain, a treacherous new single lane highway awash with water and littered with pot holes and sleeping policemen   added a frisson of hazard to the six hour journey.

But the local Tamarindo market the following day was a cook’s dream: farmers generously cut up samples of their strange and exotic fruits for me amidst the hustle and bustle of their customers.    I tried the mangostan (a small black fruit with the sepals of the original flower at the base), Chinese mamanchino, Lemon mandarino, the small Malaquina orange and Dragon fruit.

While the growers were local people, there were many others from all over the world.  Some explained that they wanted the relative freedom and anonymity of this new country, where they could follow their individual and alternative off-grid lifestyles and ambitions.  Several were selling an intriguing cross section of their artisan hand-crafted food in the market: French croissants and eclairs; bagels; fermented kimchi and more.  The sample of 95% cocoa-solids chocolate was a revelation of subtle, complex and sometimes bitter flavours that lasted on the tongue.  Afterwards, the coconut milk and lime ice-cream, spiked with lime zest and a little white sugar, was refreshing but I missed out on the peanut butter ice-cream that had sold out.  With the blare of the market music and the loud chatter of the people in the background, I was swapping charcuterie recipes with the producer of the German sausages and other preserved, smoked meats – I hadn’t imagined such a cosmopolitan mix of people and cuisines.

Then we were off-road along bumpy jungle tracks to Noam’s HIR restaurant.  First, we explored his new facilities which were in the final stage of construction before walking down to the original kitchen.  It was a simple small structure to serve his dinner guests under the corrugated iron shelter, open to the jungle on all sides.  The whole area was teeming with wildlife from the ants and insects, the birds and his own pet cat and dog.  And everything, including me having stepped in to a deep muddy puddle, was rather damp and soggy in the rain.  My spirits were low after the days of long travel, not much sleep and now this challenging environment in which to invent completely new dishes – I confess that my enthusiasm was equally damp.  You can see whether I managed to get through it all over the next few weeks. 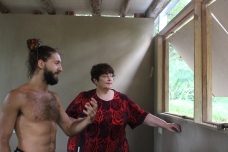 Finally, watch out for the crocodiles near those long inviting sandy beaches on the Tamarindo Pacific coast: the locals know all about them so assume that visitors will too!