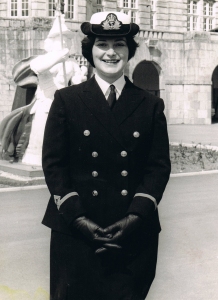 Fellow naval officer James Holman and I both lost our sight due to uveitis.  But he became blind some 200 years ago when women stayed at home while their menfolk were at sea – often for years.  Could he have imagined that the Women’s royal Naval Service would be formed some 100 years later?  And we have gone from strength to strength: last October I celebrated 100 years of Wrens with an outstanding lunch in Virginia Beach (USA) and you can share those great party food recipes (https://www.youtube.com/watch?v=1WmTqhC6N7Q&t=8s).

But, back to that shared eye condition.  The cause seems to be that our immune systems attack our own bodies causing the inflammation and damage.  But now there’s possible hope on the way.  This week I was at Moorfield’s eye hospital in London as, potentially, the only UK patient that might be able to take part in the first stage of research by the French Eyevensys biotech company.

They are investigating whether their gene-therapy can cause cells in the eye to produce an anti-inflammatory protein to fight the disease.  I learned that it has already achieved positive pre-clinical results. The medication is delivered in to the eye through a fine needle   but a key innovation is the use of tiny electrical impulses (electro transfer) which, although evaluated for other treatments, hasn’t yet been used on the eye.  The idea is that the treatment stimulates the body to become its own factory creating the answer to the condition.

For me, there was no prospect of any improvement to my sight but perhaps I could help others with the condition by testing whether this process could reduce doses and frequency of injections.  I wasn’t worried whether I would see again or not – but more about the practical implications of taking part in the trial.  It would have been good to support the hospital after they have cared for me for over 20 years.

But I was too optimistic: both my eyes have too much damage to their structure.  It would be impossible to monitor any consequences of the treatment – it would truly be a blind study!  I was sad not to be able to help but glad that my needle-phobia wouldn’t be put to the test!

Wouldn’t it have been wonderful, having won the prize commemorating James Holman, to have contributed to an answer to the condition that blinded him?  There’s more about him and the prize run by San Francisco’s LightHouse organisation at (www.lighthouse-sf.org).

Meanwhile, lack of sight didn’t hold him back -or me so you can enjoy the salmon recipe on my website: www.bakingblind.com. 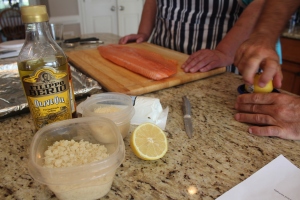